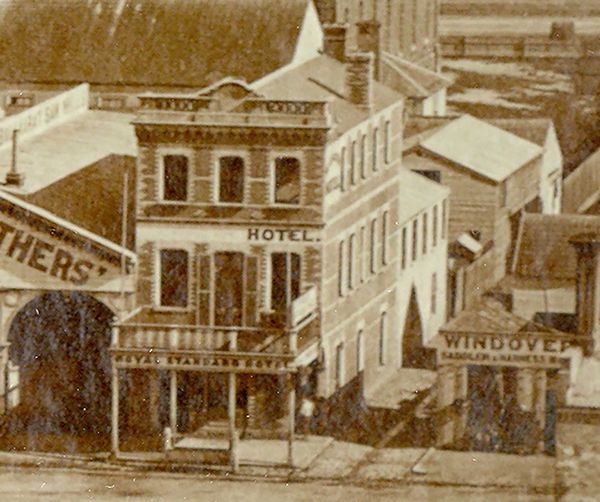 For hotels with the same, or similar names, see Royal Hotel.

On 22 March 1915, the hotel was included on a list of hotels to be deprived of their licenses. This list was compiled by the Licenses Reduction Board in Melbourne. The Ballarat West licensing district hearings on this list were to be held on 27 April.[1] The court finally closed the hotel at the end of 1917. The owner, P. Smith was paid £600 and the licensee, Anthony Evans was given £120 as compensation.[2]

In January 1917 a guest fell from an open window:

FALL FROM HOTEL WINDOW. BALLARAT, January 16. Thomas Wilson, aged 60, who at 3 a.m. on Sunday fell to the footpath from a bedroom window in an upper story of the Royal Standard Hotel, Ballarat West regained consciousness on Monday. His injuries include fracture of the base of the skull, deep scalp wounds, and internal rupture, and his condition is critical. Wilson, who was a lodger at the hotel, dropped a distance of 14 ft., and was found in a pool of blood by Constables O'Neill and Calwell, too took him to hospital. On regaining consciousness he stated that he had mistaken the open window, the sill of which is nearly 2 ft. from the floor of the bedroom, for the doorway.[3]

It on the west side of Doveton Street South, between Sturt and Dana Streets, next to Windover, the harness and saddle maker.[4][5] The building is still standing.

The publican was in court in 1909 over breaches of the licensing laws:

A story regarding an interrupted supper –the chief articles in which were corned beef and sliced tomatoes – was related in the City Court on Friday when Evan Anthony, licensee of the Royal Standard Hotel was fined £5 because a number of young men had been found on his premises after hours. Senior-constable Barber gave evidence as to having heard noises which led him and Constable Hayes to enter the hotel. They found inside the bar glasses containing fresh liquor. On a table was some bread. Mrs Anthony wife of the licensee said that her supper was spread on the table She had had some refreshments herself prior to retiring for the night. The men on the premises had booked beds for the night, and their names had been entered up by her in the lodgers' book. The police evidence was to the effect that the names were not in the book when it was produced at the hotel. Mr. Murphy P M , asked for the production of the book and having seen the names therein commented on the irregularity with which the book had been kept. Four men found in the hotel pleaded guilty, and were each fined 10/.[6]