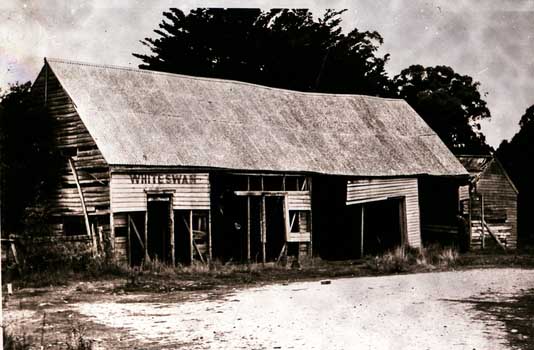 On 22 March 1915, the hotel was included on a list of hotels to be deprived of their licenses. This list was compiled by the Licenses Reduction Board in Melbourne. Licensing district hearings for hotels on this list were to be held at the Ballarat Supreme Court on 11 May.[1] The hotel was delicensed in November 1915, and the court paid £230 compensation.[2]

In November 1869, a man was charged with sexually assaulting the daughter of the publican, Thomas Honnor:

A young man named John Aees was arrested by Constable Bourke, at Creswick, on 8th November, upon a charge of committing an indecent assault upon Anne Honnor, a girl eleven years of age, the daughter of Mr Thomas Honnor, of the White Swan hotel, Melbourne road. It is stated that about eleven o'clock on Saturday night last one of the female servants hearing screams from the children's bed-room, which was quite dark, ran there immediately, when Anne told her that there was a man in the room under the bed; further, that he had got into the bed and put his hands under her night-dress and on her person, and on her screaming out he had put his hands round her neck to stop her cries. The servant girl put her hands under the bed and came in contact with a man's head. She seized it by the hair, and thereby dragged out the man and took him to the bar, where he was recognised as a young fellow who had been drinking there that evening. Mr Honnor (the father) upon hearing of the circumstances rushed into the place and knocked the man down, and he on getting up made his escape. Honnor gave information to the police next morning, and search was made for Aees, but without success. It appears, however, that about seven o'clock a.m. on Monday, 8th November, Aees went to the White Swan hotel to procure his clothes which he had left behind on the Saturday night, and that Honnor sent at once for the police and had him arrested. He was brought before Mr Lees, J.P., on 9th November, and remanded till the following day.[3]

The White Swan Hotel was described as being at "Springs".[4] In Angela Taylor's book, "A Forester's Log: The Story of John La Gerche and the Ballarat-Creswick State Forest 1892-1897", she includes a photo from the Ballarat Library Collection, captioned "White Swan Hotel, Springs, Dead Horse.[5] This area is now known as Glen Park.

The hotel was pulled down in March 1947 and the site was flooded as part of the White Swan Reservoir.[6]